In this project, we propose to explore the relationships between fictional spaces, real spaces and the Geoweb, by addressing the following question: how the conceptual and technological tools that are emerging from the geoweb can serve to improve our understanding of the spatial structures of fictional places and of their relationship with the referential places?

In this earlier part of the project, 46 contemporary Canadian films have been mapped in a systematic way. This mapping endeavor had two main objectives:

1. To develop a cybercartographic application

This application enables the simultaneous representation of the places of the narration (geography), the connection between these places (geometry), as well as the temporal dimension inherent to storytelling.

The cybercartographic application is presenter in this paper: Caquard S. and Fiset J.P. (2013). How Can We Map Stories? A Cybercartographic Application for Narrative Cartography, The Journal of Maps (Available here or on demand).

The results are discussed here: Caquard S., and Naud D. (2013 Forthcoming). A Spatial Typology of Cinematographic Narratives. In Taylor D.R.F. and Lauriault T.P. (eds.), Developments in the Theory and Practice of Cybercartography: Applications in Indigenous Mapping (2nd edition), Elsevier.

2. To analyze the geographic structure of Canadian cinematographic places 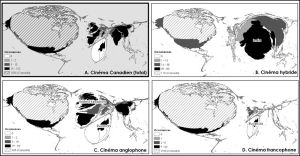 On these cartograms the size of the countries (and of the provinces) is proportional to the number of time each country or province appears in the 46 films Canadian films studied. Canada is obviously the main location for Canadian films, furthermore for francophone Quebecois films which tend to unfold in Quebec and mainly in downtown Montreal.

Taien Ng-Chan’s essay “Mapping Out Patience: Cinema, Cartography and W.G. Sebald” was published in the journal Humanities as part of a “Deep Mapping” special issue, edited by Les Roberts. It is available online: http://www.mdpi.com/2076-0787/4/4/554

Special issue on Cartography and Narratives

The special issue of The Cartographic Journal on Cartography and Narratives (co-edited by S. Caquard & W. Cartwright) is now available online: http://www.maneyonline.com/toc/caj/51/2